Companies the world over are directing their ingenuity at the fight against the coronavirus. Here are the front-runners, from sanitising robots to a 3D-printed hospital ward

Designers, engineers and programmers have heard the klaxon call. The last few weeks have seen a wave of ingenuity unleashed, with both garden-shed tinkerers and high-tech manufacturers scrambling to develop things that will combat the spread of Covid-19.

Many of their innovations raise as many questions as they answer, though. Could 3D printing now finally come into its own, with access to open-source, downloadable designs for medical parts? If so, will intellectual property infringements be waived, or will altruistic hacktivists still face costly lawsuits? Could mobile phone tracking map the spread of infection like never before, keeping people away from virus hotspots? If so, might governments use the pandemic as an excuse to ramp up surveillance measures post-crisis?

From 3D-printed respirator valves to UV-sanitising robots, here are 10 inventions that the battle against coronavirus has spawned so far. 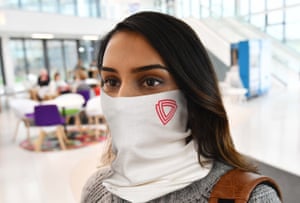 Biochemists at Manchester University have developed a snood with “germ trap” technology. The result of a 10-year project with biotech firm Virustatic, the snood has now been hurried into production. Its creators say the fabric coating has a similar formation to the carbohydrate structures on the surfaces of the cells that cover the oesophagus. They created the technology by attaching glycoproteins to carbon cloth, then to other cheaper materials such as cotton.

Their tests have shown that it traps 96% of airborne viruses. According to inventor Paul Hope, the snood is more breathable and flexible than a conventional mask, meaning patients can also wear them. 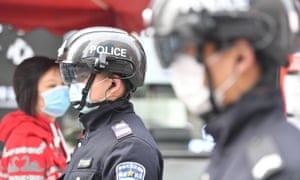 The Shenzhen-based company has developed a smart helmet that can detect people with a fever up to five metres away, sounding an alarm when anyone with a high temperature comes close.

The headset, which is already used by police in Shenzhen, Chengdu and Shanghai, features an infrared temperature detector, an augmented-reality visor, a camera that can read QR codes, plus wifi, Bluetooth and 5G so it can beam data to the nearest hospital. Equipped with facial recognition technology, the helmet can also display the subject’s name on the AR visor, as well as their medical history.

According to the developer, it would only take officers two minutes to scan a queue of more than 100 people with the help of the helmets, while one big hospital would only need 10 such helmets to cover every corner of its site. Reassuring in a pandemic, perhaps, but a terrifying prospect the rest of the time. 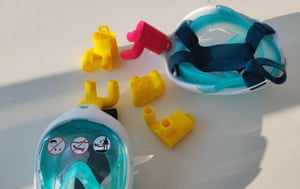 An Italian company came to the rescue after a hospital ran out of crucial valves for its ventilators. The hospital in Chiari, in the Brescia area of northern Italy hit hard by the virus, had 250 coronavirus patients in intensive care, and was short of venturi valves – which connect the ventilator to a patient’s face mask, and need to be replaced for each patient.

After the original supplier was unable to provide new valves quickly enough, the hospital put out a call for help. Isinnova contacted the manufacturer, Intersurgical, but was unable to obtain a digital model of the part, so its team decided to reverse-engineer its structure themselves. The first prototype was ready within six hours, with 100 working valves printed and supplied to the hospital within a day.

South Korea has been leading the way in testing its citizens for Covid-19, with nearly 20,000 people tested every day, more people per capita than anywhere else in the world. As well as pioneering drive-through centres, where people with symptoms can check their health status, one hospital in Seoul has introduced new testing booths that allow medical staff to examine patients from behind the safety of a plastic panel.

The phone box-like cubicles use negative air pressure to prevent harmful particles from escaping outside. Each patient steps into the booth for a rapid consultation via an intercom, while samples can be safely taken by swabbing their nose and throat using arm-length rubber gloves built into the panel. The whole process takes about seven minutes and the booth is then disinfected and ventilated.

“We used to collect samples inside a large negative-pressure room,” says Kim Sang-il, president of the H Plus Yang hospital where the booths are in use. “It took a long time to disinfect the place. We used to take eight to nine samples per day, but we can now take 70 to 80.” 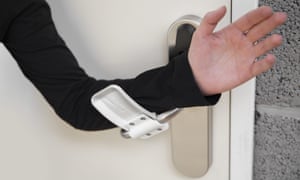 Tired of pulling your sleeve over your hand to touch the door handle? Belgian 3D printing company Materialise has designed a hands-free door handle attachment. Under the slogan “Do less harm, use your arm!”, the design, which has been made available to download for free, consists of two simple parts that can be screwed either side of a handle, allowing you to use your arm or elbow to turn the handle.

“Door handles are said to be among the most contagious places in a building,” says the company’s CEO, Fried Vancraen. “We call upon everyone who has access to a 3D printer to print the part and make it available to their local community.” 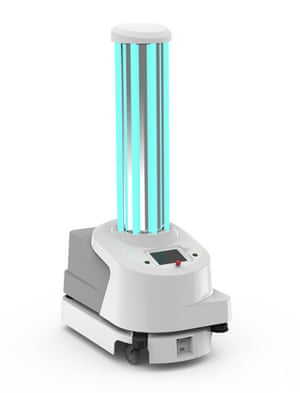 Looking like a cluster of lightsabers on wheels, a sterilising robot has been developed by a Danish company. It can kill virus cells and sanitise hospital wards without the need for chemicals. The eight bulbs on each roaming robot emit concentrated UV-C ultraviolet light, which destroys bacteria, viruses and other harmful microbes by damaging their DNA and RNA, so they can’t multiply.

This could reduce dependency on chemical-based disinfectants such as hydrogen peroxide, which require rooms to be left empty for several hours during sterilisation, making them impractical for many parts of hospitals.

The robot was launched in early 2019, following six years of collaboration between parent firm, Blue Ocean Robotics and Odense University Hospital, but recent demand has seen production accelerate, so it now takes less than a day to make one robot.

A similar device has been developed by Chinese firm YouiBot, which took its existing robot base and added thermal camera and UV-C bulbs. It has supplied factories, offices and an airport, and a hospital in Wuhan. “It’s running right now in the luggage hall,” says YouiBot’s Keyman Guan, “checking body temperature in the day, and it goes virus killing during the night.” 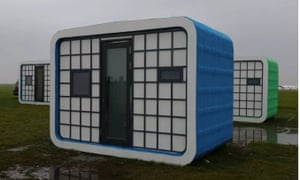 Chinese company Winsun has deployed its rapid 3D-printing powers on an architectural scale, manufacturing 15 coronavirus isolation wards in a single day. The little concrete cabins were originally designed to be used as holiday homes, but the company ramped up production to cope with demand from overcrowded Chinese hospitals at the height of the epidemic.

The buildings, which have showers and eco-toilets, were printed through an extrusion process, with a robotic arm mounted on rails, gradually depositing layers of concrete to build the walls. The company says it uses recycled construction rubble in the process and claims its structures are twice as strong as a conventional concrete construction. 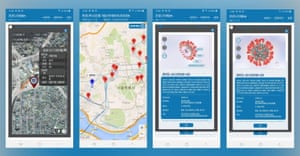 Coders have joined the battle against coronavirus, racing to develop apps. In South Korea, virus-tracking apps make up six of the most popular 15 downloaded apps, by far the most popular being Corona 100m. Using the wealth of data collected by the government’s testing programme, the app alerts users when they come within 100 metres of a location visited by an infected person.

It also allows people to see the date a coronavirus patient was confirmed to have the disease, along with that patient’s nationality, gender, age and the places the patient visited. Launched on 11 February, the app had a million downloads in its first 17 days.

Other initiatives include the Coronamap website, which shows the travel histories of confirmed Covid-19 patients and Coronaita, which functions like a search engine for information on coronavirus-hit areas. Other states, including Singapore and Israel, have also deployed apps that can help the authorities track who users have come into contact with, to help model the spread of the virus, while Taiwan has introduced an “electronic fence” system that alerts the local police if a quarantined user leaves their home.

Discussions are under way about a tracking app in the UK, sparking a debate about privacy. An open letter from a group of “responsible technologists” highlighted concerns “that data collected to fight coronavirus could be stored indefinitely or for a disproportionate amount of time, or will be used for unrelated purposes”. They added: “These are testing times, but they do not call for untested new technologies.” 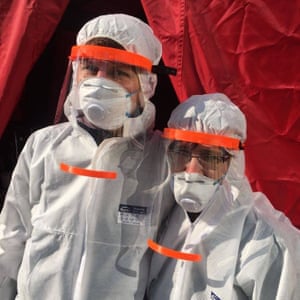 Czech company Prusa, which claims to have the largest 3D printing farm in the world, with more than 500 printers, has started mass-producing protective face shields, used by medics. It is manufacturing over 800 a day, and has donated 10,000 to the Czech ministry of health.

“The materials required to manufacture one unit are less than $1 and that is without any quantity discounts when buying,” says the company’s founder, Josef Průša. “We literally got materials around Prague during one afternoon.”

Another firm, Stratasys, has also developed a 3D-printed face shield and masks. According to its CEO, Yoav Zeif: “The strengths of 3D printing, be anywhere, print virtually anything, adapt on the fly, make it capable for helping address shortages of parts related to shields, masks, and ventilators, among other things.” 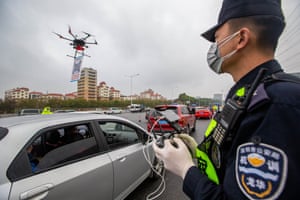 In a world where we are forbidden from leaving the house, it looks like drones might finally come into their own. In China, the world leader in drone manufacturing, the mini choppers have been mobilised for everything from fever detection in crowds to disinfecting public spaces, to delivering supplies to far-flung locations.

Agricultural drones, designed to spread fertiliser, have been repurposed to spray disinfectant across pavements and public squares, as well as deliver groceries to remote island communities. Drones have also been used to deliver test samples, dramatically cutting journey times.

In France, the police have started using drones to help enforce its lockdown, monitoring parks and public spaces to make sure people are not leaving their homes for non-essential trips, while, in the UK, Northamptonshire police are planning to increase their fleet of drones, which will be equipped with speakers to transmit public information messages and tell people to get back indoors. No nipping out to get those non-essential items, now – the drones are watching.